What a big freaking day! New albums from No Doubt AND Green Day. Everybody 90’s now!

If anyone’s looking for me I’ll be holed up in my room with these bad boys: 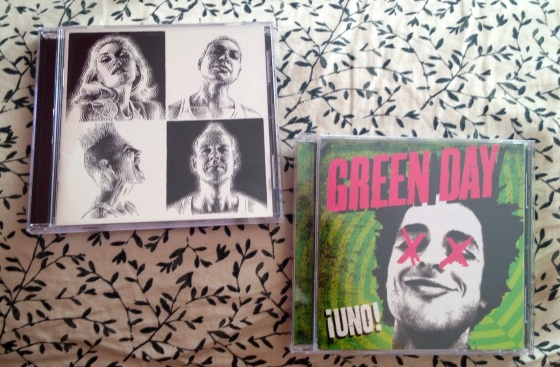 Both bands also have new music videos. Check ’em out!

No Doubt – Push and Shove

It’s weird going through upcoming album fever as a semi-grownup for bands that I was (and let’s be honest still am) obsessed with as a youngster. Here’s a run through of the things I (and hopefully you) will be listening to as this year carries on.

The full title of this album has as many words as times I said the f-bomb about not getting to see Fiona live in concert earlier this year. 23 if you’re interested. First listen streams for Idler Wheel are popping up all over the place – NPR/New York Times – but if you’re like me, you’ll hold out to buy the actual CD on June 19th. Until then, watch Fiona who wants to be/next to the sea/with an octopus’s garden on her head.

NO DOUBT – PUSH AND SHOVE

Set for a September 25th release date, the band will let loose their first single from Push and Shove, a track called “Settle Down,” on July 16th. Until this happens, settling down will be quite the task. Be sure to program your DVR for what is sure to be an insane performance on Fallon on July 26th. In the meantime, check out their teaser video and keep your eyes out for another one coming soon.

Why release one album when you can release three? Well, there lot’s of reasons, but Green Day’s not so worried about them. Spanning through fall and winter, get psyched for a three dose fix of new punk-pop tunes. It’s still too early for any solid news on what to expect, but Billie Joe has said these are some of the best songs of the band’s career. I’m mostly curious to see how they’re going to handle touring and promoting three albums at once… It’s going to be a busy year. Keep your eye out for studio updates on youtube, and feel cool knowing I’m doing the same exact thing.