If you know me, you know I’m always writing jokes. Here are my 15 favorite I wrote this year.

A man in Australia has been bitten by a venomous spider on his penis for the second time in five months. “Fool me once…”, said the person who had to suck out the poison

A new restaurant has opened in New York that is inspired by the show Golden Girls. And like Blanche’s legs, it’s open 24 hours.

A new study finds that 84 percent of all wildfires in the US are started by people. Though one man strongly disagrees. (KEY: Billy Joel)

It was announced that this summer Manhattan will get a fourth area code, 332. While the Bronx is sticking with its area code, 911.

This month marks the 75th anniversary of the classic animated film Bambi. And he’s still looking for the bitch that killed his mom.

A man in Florida protected his prized BMW during Hurricane Matthew by parking it in his living room. While his wife and kids got the garage.

This week marks the 10th anniversary of the introduction of the iPhone. Meaning iPhones have been around longer than most of the people making them.

An ice cream parlor in Mexico has begun serving ice cream specially made for dogs to eat. The most popular flavor is “other dog’s butt.”

A woman in Australia gave birth to a 13-pound baby, and she’ll never be the same down under.

A Massachusetts man tried to argue his way out of a speeding ticket by claiming that the police officer’s radar gun picked up a deer running at 40 miles an hour, and not his car. Sure, blame it on the guy with brown skin.

New York City officials said that the city doesn’t face any threat from people dressed as “creepy clowns.” That’s just how they dress in Brooklyn.

A shoe company was able to use a 3-D printer to make shoes big enough for a Michigan man, who was once listed as the world’s tallest teenager, and has size 28 feet. He’s hoping next they’ll be able to print him out some condoms.

Shaquille O’Neal announced that in 2020 he will run for sheriff of Henry County, in Georgia. Even though traditionally in Georgia, big, black men run FROM the sheriff.

The controversial Netflix show 13 Reasons Why, about a teenage girl’s suicide, has been renewed for a second season. Because getting cancelled would be the easy way out.

Two more Fox News employees have joined a race discrimination lawsuit against the network, saying working there was “more akin to plantation-style management than a modern-day work environment.” For starters, they were literally chained to their desks.

A Wisconsin man says that he is suffering from a rare disease that causes him to have up to 100 orgasms a day. But the real victim is his washing machine.

Chinese officials conducted extensive body searches of the 10,000 doves used in this week’s National Day ceremony, including examining their feathers and anuses looking for dangerous materials. And that is what it sounds like when doves cry.

A trial is being held in New York State to have chimpanzees declared “persons” rather than “things.” Us first, said women.

A couple in Florida caught a 13-foot alligator entirely by hand. And they celebrated by doing more meth.

A man, whose flight from Cleveland to New York had been delayed for several hours, was surprised when he boarded and discovered that he was the only person on the plane. But that didn’t stop him from joining the mile high club.

Australian officials revealed that they secretly killed hundreds of koalas to prevent overpopulation. Or as it will be referred to in the future: “The Koala-caust”.

According to reports Turkey’s tourism board rejected a new ad starring Julianne Moore due to what they call her “poor acting.” Instead, they’re asking for Julianne LESS.

According to a new survey 94 percent of Americans think the Japanese are hard-working people, and the rest think they’re Chinese.

CBS announced it is ending the series CSI after 15 years. Cause if there’s one thing CSI’s audience understands, it’s retirement.

US News and World Report has ranked Harvard as the top global university. In case they ran out of things to brag about.

A tractor trailer in Colorado loaded with 40,000 pounds of cheese split in half after crashing. Said the driver, “What are we gonna fondue?!” 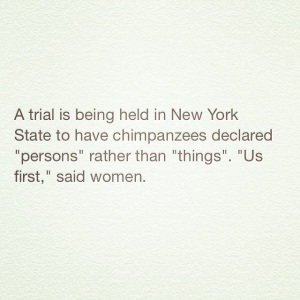 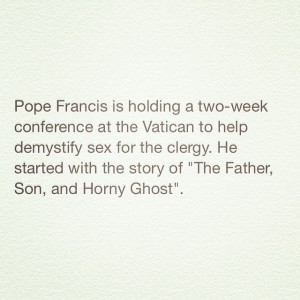 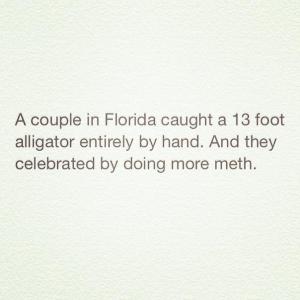 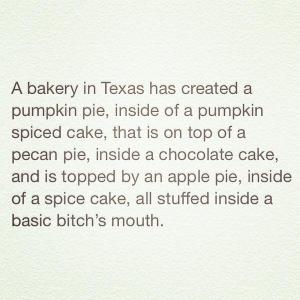 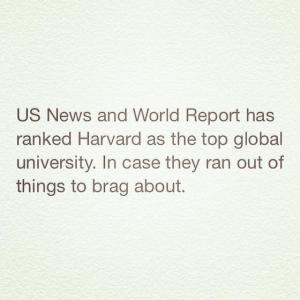 As the news cycle keeps spinning, it’s important to look back and pay homage to jokes that have passed. Grab a black veil, cut some eye holes in it, and get your reading on. I apologize if your co-workers look at you weird for laughing and wearing a weird veil.

Julia Pastrana, who lived in the 1800s and was dubbed “the ugliest woman in the world,” was finally buried this week in her native Mexico. And time hasn’t done her any favors.

A pastor is demanding that Tennessee wildlife officials return five venomous snakes they confiscated from him, saying that he uses them as part of his services. Prompting Mormons, Jehova’s Witnesses, and Scientologists to respond in unison, “Oh and we’re the weird ones?”

In an effort to save the endangered cheetah, some zoos are pairing up cheetah cubs with puppies to help teach the cats how to thrive while in captivity and make the internet explode.

TSA officials this week forced Kanye West and Kim Kardashian to be rescreened by security after a star-struck staff member at Kennedy Airport allowed them to bypass a security check point delaying the flight for an hour, which was spent going through all the junk in Kim’s trunk.

It was announced this week that two of the Great Lakes, Lake Huron and Lake Michigan, have reached their lowest levels ever recorded. The lakes are reportedly so low they’re watching Bravo’s “Vanderpump Rules.”

A couple in Connecticut that has been married for 80 years has been named the “longest married couple” in the US. When hearing the news, the wife was so excited she walked all the way to the basement to tell her husband.

An Oregon man has filed a lawsuit against an IRS agent claiming that he was coerced into having sex with her after she said she could help him avoid a penalty on his taxes. She claimed to be able to fix his problems with just one small deposit.

Ryan Gosling revealed this week that in the early 1990s he had a chance to be a part of the Backstreet Boys, but declined because he thought they would never be a success. “Who is laughing now?” Asked Backstreet Boy AJ McLean as he served hot dogs at the mall.

Security officials at Chicago’s O’Hare Airport were shocked to discover a mysterious package containing 18 severed human heads, which turned out to be misplaced medical samples. The discovery helped make strides in Chicago’s goal of becoming the new Florida.

Boy oh boy, it’s the post you’ve been waiting for!!! My pale-after-sickness face has got a lot of jokey stuff to say about Chris Brown, the boy scouts, Oprah, and so much more. Watch please!!

Yo yo! It’s news time! I got Kardashians, flu shots, and Justin Timberlake for ya! Enjoy

OMG my giant face is at it again!! We’ve got some HOT news stories for you this week AND a celebrity guest appearance. Check it!!

In honor of the new year, I’m starting up a new feature here on Little Conqueror! Every week me and my giant face will be bringing you some of the week’s top stories. Who says I never get you anything? Enjoy!

More Conquering the News on the way! Stay tuned 🙂 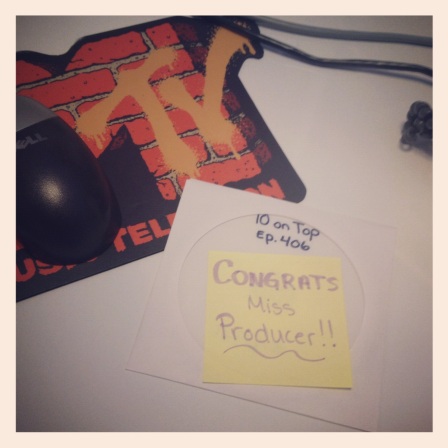 The moral of this post is that dreams come true. Growing up all I ever wanted was to work for MTV. Twenty-eight years later, that is exactly what I’m doing. Check out my first efforts as a producer in the clip below. I got to cover country singer Hunter Hayes and rappers Macklemore & Ryan Lewis. Fun fact: I go to the thrift stores featured in Mack and Ryan’s video every time I visit my parents in Seattle. Enjoy!

Please join me as I send last week’s jokes to their final resting place. Laugh crying only please.

Tennessee police this week shut down an illegal strip club that featured a live-sex show involving a pair of 400 pound dancers. One of their regular patrons claimed to be crushed. And he was sad about the club closing too.

Florida police arrested a woman who allegedly attacked her ex-boyfriend with his own prosthetic leg. On why he didn’t change his locks sooner, the man says he is kicking himself. Literally.

On Wednesday owners of Lukoil gas stations in New Jersey and Pennsylvania, who are upset with unfair pricing practices by their parent company, protested by raising their prices for one day to 8 dollars a gallon. The worst part was it gave that one smug guy more reason to talk about his Prius.

A designer has developed a bicycle that is made entirely of cardboard and can carry a person weighing over 450 pounds. Until it rains.