Memorial Day was a day of firsts that left me a sweaty, sunburnt, bug bitten mess, but me and my newly skinned knee have never felt so strong.

Started From The Bottom

Evan and I intended to take the 7:43 Metro North train to Manitou, but of course ended up missing our stop. Being tried and true New Yorkers, we got off at the next one, with the intent of walking back, however it wasn’t that easy. It was a four mile trek that started with a hike in the woods, and ended with us being picked up on the side of the road by a nice man named Auggie.

Auggie was headed to the same exact place as us, or so we thought, and he flaunted his local status as “Maybe I’m Amazed” blared through his truck’s speakers. After we covered all the hot topics for dads… directions, distance to the city, the train we took to get there… Auggie dropped us off at the base of Bear Mountain.

As you can probably guess from my leopard print hat, this was my first time going hiking. And boy did I go big before I went home. The trail Evan and I intended to take was a literal walk in the park, but the one Auggie brought us to was an intense, uphill trek.

I visualized my impending Beyonce-esque thigh gap one lunge at a time as we climbed up over a mile’s worth of rocks, pushing my heart rate to a record high. There were certain points when not just me, but my body wanted to quit, however there was no Starbucks or air conditioned snack tent to retire to. The only option was to keep on climbing, and think about how “Ain’t No Mountain High Enough” was probably written by someone who’d never actually scaled a mountain.

But then we got to the top.

The feeling of accomplishment was beyond comprehension, and made even better by the fact that we could see the now tiny speck of street where our climb had started. It was a view made for instagram, and after about a thousand mosquito bites, and two thousand selfies, it was time to make our way back down.

THIRD FIRST: STARING DOWN A VERTICAL, ROCKY DESCENT AND REGRETTING I CHOSE THE CHEAPEST OPTION OF OBAMACARE

Disney’s “Tower of Terror” has got nothing on the hour of terror Evan and I spent climbing down the mountain, where no less than three people stopped us to suggest we turn back. But, as I clung to the rocks for dear life, looking for my next footing, there was nowhere else to go.

Evan and I took our time, mostly relying on Madonna-like arm strength, and precarious looking branches for support, but scooted down the rocks on our butts when necessary. This was not a time to worry about looking silly. This was a time to worry about what color cast I’d pick if something went wrong.  Thankfully, nothing did, but if you’re wondering, I’d go with purple.

FOURTH FIRST: PURPOSELY STANDING NEXT TO A SMELLY GUY ON THE SUBWAY TO COVER MY B.O.

This one’s kind of self-explanatory, but I want to thank the guy I stood next to on the D train for managing to smell worse than my day’s collection of blood, sweat, and overcome fears. 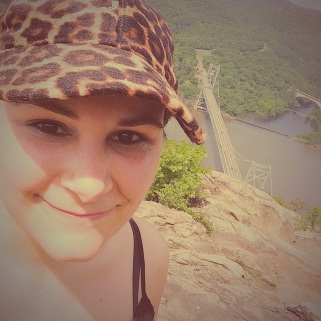 BRIDGEFIE
noun: selfie with a bridge