Finishing a good book is one of those things that makes you both happy and sad at the same time. It’s kind of like an encore at a kick ass concert. You’re stoked to get a little bit more, but it signals the end of a great experience. Similarly, reading “Talking to Girls About Duran Duran” by Rob Sheffield has been and for a couple more pages still will be a great experience.

In the book, Sheffield catalogues his life through music and in each chapter expounds upon a single song specific to that time. “Talking to Girls…” has made me laugh out loud in public, mostly around strangers and cry, also in public around strangers, and I am very much not looking forward to it ending. Although, the public humiliation is something I’m okay with letting go.

Please read this book. Not only will it make you nostalgic, but it’s a great read while at the same time being educational. I learned “Cassingle” is the name of some of the things I owned growing up. So that’s cool. And so is Rob Sheffield. And so is “Talking to Girls About Duran Duran.”

One of the songs Sheffield covers is “Crazy for You” by Madonna. This song triggers a series of memories for me also. Here’s my humble attempt to write something similar to what you’d find in “Talking to Girls…” If you don’t like it, we can treat it like most things that occurred in the early 90’s– like it never happened.

MADONNA “CRAZY FOR YOU”

It was the early nineties. I’m unsure of the year. I’m unsure of the year because at that point my family had moved four times and I hadn’t yet reached the age of ten. All I know for sure is that we lived in Lancaster, Pennsylvania. I feel like it must have been early into our tenure there because the only furniture in what would eventually be my dad’s office was a desk, a dog crate, and our computer. The computer is considered furniture because the internet was in its early stages and all the computer could really do was help you play solitare and type things. The printer paper still had the holes on the side you had to rip off. I’m surprised we even had a computer at all.

I like to lie to people and say that my first CD was Green Day’s “Dookie.” And that’s not true for a couple reasons. One, because it was a cassette. And two, I owned an actual Compact Disc before that. I justify my lie because “Dookie” was the first album I ever acquired by choice. I forced my mom to drive me to Wal Mart AND pay for it, and I remember her waking me up the next day by saying “Good morning my little punk rocker,” as she gently rubbed my shoulder.

In reality, my first CD was “The Immaculate Collection” by Madonna and that’s the honest to g-o-d truth. My grandmother was the coolest person to ever walk this Earth, which I know is a bold statement considering Dave Grohl exists. However she made even my favorite rock star look like a potential character in Revenge of the Nerds. Grandma worked for the JCC Thrift Store in West Palm Beach, Florida, and as a senior ranking senior citizen in the store’s staff, she had first pick at all the donated goods that came in. She got Tommy Hilfiger polos, fake Chanel purses, and a gold Cadillac that my family nicknamed the “pimp-mobile.” She also for some reason got me this CD, and I wasn’t sure what to do with it when it came in the mail.

Luckily, my dad had the wherewithal to install a CD Rom drive into our furniture like computer. CD’s were a new invention and while we could play cassettes pretty much anywhere, the computer was the only place that could reveal the contents of those shiny silver disks. I’m not even sure I knew Madonna existed before getting her album, but if you install a CD Rom drive, CD’s will come, so upon opening my grandma’s package, I marched its contents straight up the stairs and didn’t stop marching until pushing play. What can I say, I was a kid who liked to march.

To this day, I could most likely sing “The Immaculate Collection” to you start to finish while performing all the dances younger than ten year old me choreographed in my father’s soon to be office. If I didn’t know who Madonna was pre-CD, I definitely did after. I drew moles on my face, wore outfits involving poodle skirts and leotards, and learned how to vogue. But more clearly than anything, I remember the first time I really heard the song “Crazy for You.”

At first, “Crazy for You” was the weird slow song I always wanted to skip in order to get back to the fun pop dance times. My older sister, Ilana, however was blessed with more patience than I’ll ever have, and cemented the fact that I’d never again skip over that song. She  joined me one day at the CD Rom drive and pointed out that when a way-more experienced Madonna sings “two by two their bodies become one,” she might be talking about people having sex, or as my friends and I called it, “making cotton candy.”

After this discovery, Ilana and I listened to “Crazy for You” on repeat for a good couple of hours. We giggled every time she sang the scandalous lyrics,  and knowing the true meaning made me feel like a real grownup. A real grownup who referred to sex as cotton candy and wore poodle skirts recreationally.

Eventually, my dad’s office became an actual office and my parents bought me a little stereo for my room. I made full use out of its ability to play CDs and slowly expanded my collection. And while I might not be sure of the exact time all this happened, I am sure that listening in my bedroom never measured up to listening on the computer. And for the record, even though I’m kind of an adult now, I still giggle every time I hear “Crazy for You.” 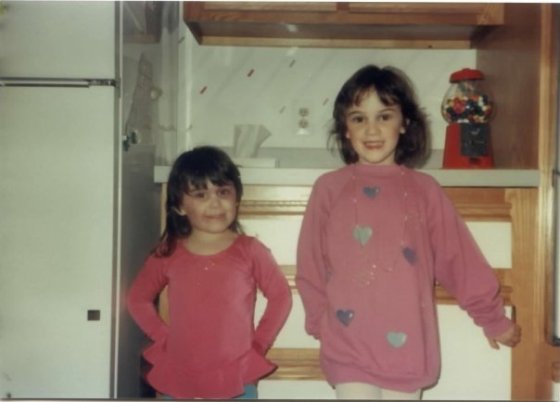