It wasn’t until later in my life that I was brave/fortunate enough to start getting floor tickets to shows. In my younger years, floor seats were a status symbol. They indicated financial fortune and/or someone being crazy committed to the band. Enough so to sleep outside the ticketmaster booth or sleep with a radio DJ (there’s a reason they’re not on TV) or install enough phone lines (cell phones and internet weren’t yet a sure thing) to ensure they’d get through. But little did I know, the floor isn’t a magical place where you have a guaranteed kickin’ view. It’s a place where the only thing guaranteed is people kickin’ you. Here are some friendly pieces of advice on how to work it on the floor, instead of letting the floor work you.

1) If you want to be close, arrive early. I know this sounds like common sense, but trust me. Your neighbors will be much more okay with you having a better spot than them if you got there early enough to get it.

2) On that note, get to know your neighbors. THIS IS THE MOST IMPORTANT RULE! These are the people that will have your back if someone’s trying to edge in front of you and help save your spot if you have to pee. And also the people that will be way too close to you during the long stretches before and in between sets. Why not in this awkward closeness make friendly conversation and create a pleasant community so that there’s less of a chance of the assholes (there’s always at least two) ruining your show. It makes a WORLD of difference.

3) Identify the assholes and stay as far from them as possible. Like I said above, there will always be at least two people who are too drunk, loud, pushy, or all three (the trifecta!) and there is nothing you can do about it. Let them have their fun (?) and don’t let it ruin your gig.

4) Your ultimate view won’t be settled until the show actually starts so relax until that happens. Don’t freak out about what you can or can’t see because it is definitely not final. And please…

6) Be nice. Smile. Act in a way that doesn’t make everyone hate you.

7) Now it’s time for the “don’ts.” Don’t carry a lot of stuff, don’t wear a backpack, don’t drink too much, and don’t leave your spot.

8) But if you do leave your spot, channel your inner Southern belle and “please and thank you” your way to the bathroom or the bar. It might seem scary and impossible to navigate through the crowd and back, but I’ve noticed that as long as you say “excuse me” and acknowledge the situation and make it clear you’re not trying to scam anyone out of a better spot, people are usually very willing to get out of your way. So remember to have manners and NEVER EVER EVER push anyone. That’s a one-way ticket to the back of the house.

9) Know people will touch you and don’t get mad about it. This might seem like common sense, but a lot of people seem to be surprised by just how up in each other’s grill general admission is. I’ve seen people start fights and say some choice words because they felt someone around them was intentionally leaning into or poking or touching them and it’s just the stupidest thing. You know how when sand gets to the bottom of an hour glass there are less and less places for it to go? Well, floor people are the sand, and the stage is the skinny part of the glass, so shiz will get packed up there. It’s going to be close quarters and even the biggest personal space freaks (like me) just have to get over it.

10) Be prepared for the weirdness of being that close to your favorite band. This is something I’m still getting used to. It’s one thing to nerd out and go crazy while blaring tune-age alone in your room, but quite different to do the same thing with the band right in front of your face. Fun fact: they can see you. This might be a non-issue for some, but I get a little wigged when I get caught mid-air-guitar. Also, it’s can be a little bit heady to try and have unbridled fun without any chance of anonymity. Or maybe I just think too much.

Also, it helps to be as cute as me and Evan. We killed it on the floor last night seeing Garbage at Webster Hall. More to come on that! 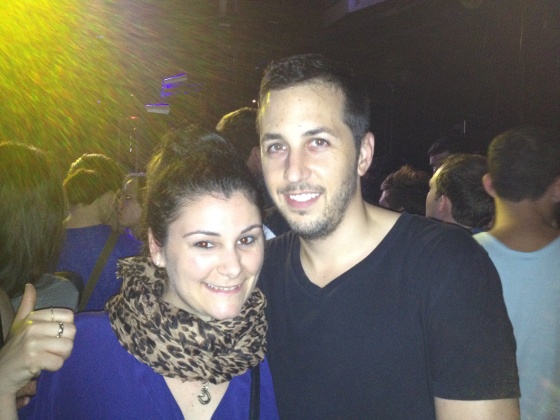