So as most of you know today, April 5th, is the anniversary of Kurt Cobain’s death. I’m not going to pretend like I have anything new to say about this. I can say that Nirvana and Foo Fighters are really important to me. Their music is the soundtrack to my everyday life, and who I am is very much affected by these bands.

I was lucky enough to go to the Nirvana exhibit at the Experience Music Project last time I was in Seattle, and to celebrate Kurt, I thought I’d share some of the photos with you. I know they’re not much, but it’s what I got. So, here goes…

As it worked out, I went to the exhibit on opening day. It was super crowded, which limited my ability to take photos. That said, it was a lot of fun to be packed in like sardines with people just as stoked as I was.

This will always make me laugh: “Nirvana played “Smells Like Teen Spirit” and “Territorial Pissings,” trashed the set, and then Kurt, Krist, and Dave pretended to make out with each other during the show’s closing credits. All this and they were still invited back a year-and-a-half later.” 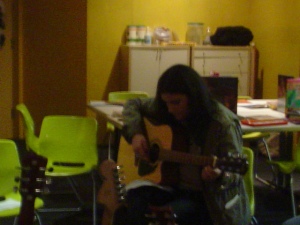 As part of the exhibit they conducted free guitar classes. They tried to teach us “Smells Like Teen Spirit” and the opening to “Come As You Are.” The best part was watching my mom pick up a guitar for the first time. She’s a good sport.

This letter is worth reading word for word.

This last one is just for fun. To pass the time at SNL, Brian started drawing my picture, but it ended up a little different than we intended. I think it’s better this way.

One thought on “Kurt and Nirvana”