Okay, so I’m playing around with the idea of having regular features here and maybe this will be one of them. We’re all in this blog thing together, k?

To give some backstory, I have 4 roommates. As in 5 of us all live in one apartment. Oh, and there’s also a significant other who’s here pretty regularly as well. That said, we have a lot of adventures. Most involve some type of food, and most are spur of the moment. Such was last night.

Another bit of exposition is that everyone in my apartment works in the tv/film industry, so we don’t keep regular schedules. That’s why on a random Monday afternoon Marlo and I found ourselves looking for something to do.  They happened to be shooting the new Cohen Brothers movie  down the street (20 blocks) so we decided to visit some of her friends on set.

I’m aware that having the ability to do that is like a really cool thing. In my heart, I will always be the girl in Indiana watching TV and envying all the New Yorkers who had crazy awesome things happening right in their backyard. So rest assured, I’m not jaded… yet.

After walking along the river and through Riverside Park, we started seeing telltale signs of a shoot. Campers were parked all along the street and the biggest lights ever rested on cherry pickers outside of an apartment building window. Then busy looking people with walkies, paperwork, credentials, hoodies, and cigarettes started rushing by us. We were on set.

Marlo knew every single person and we stopped to say hi to all of them. How come every production boy is the cutest boy I’ve ever met?  They were shooting inside, so we didn’t get to see much, but all that standing outside and trying to be alluring was making me hungry. It was time to eat. 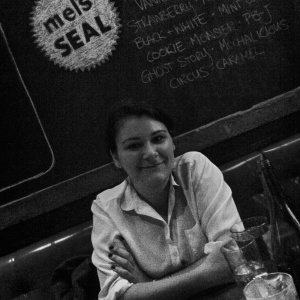 You can see more pics by Marlo on her Twitter at the link above. She kills it on Instagram!

We ended up at Mel’s Burger Bar an UWS restaurant that I’ve walked by and wanted to go into a million times. It was a great meal. I’m teaching Marlo how to drink whiskey, so she got a Powers on the rocks. I’m in a house ale phase and got Mel’s signature draft beer. $4 dollars. Light and delicious. Done.

The veggie burger was one of the best I’ve ever had. It was home-made and had a sweetness and crispness to it that most meat-alternatives are lacking. It was served on the most toasted rye-toast ever and we shared the Atomic Fries between us. Atomic fries are basically a marriage between fries and buffalo sauce with FRESH jalapenos chopped up on top. For the record, they were as delicious as they sounded. Then came a baby sized cotton candy ice cream sundae and the decision that we were definitely walking home.

Another pic by Marlo. Her tiny cotton candy sundae and my tiny cookie monster one just hanging out waiting to be eaten.

I almost forgot… On our walk we saw the first flower of the year. It’s almost Spring, guys! More adventures to come…